The big standout performer in this package set is the driver. It felt and performed like one of the premium models.

The latest and greatest club technology is just too complicated today for many average and new golfers, and too expensive.

I strongly recommend these clubs for anyone upgrading there set. I bought these clubs to replace my first set of clubs I got off Craigslist. They have performed great and the height customization is extremely helpful.

Thank you Stix. The change in look, feel and execution is paramount. My new clubs have brought so much more to my game than I thought possible. Thank you!

I like everything about the clubs great feel/weight, perfect flex, couldn't ask for more in the putter. Never thought I'd consider a golf club(s) to be sexy, but they are. I’m a 37 yrs old guy how always liked golf but never tried it seriously just some pointless driving range once in a while!
I decided to go and play regularly that’s why I bought this classic set (11 clubs-silver) and yo be honest I do not have much to compare with but let me tell you they look and feel amazing! I think one of the best things is that you can actually customize them according your height. I do NOT regret have bought it! As a first set it’s just amazing!

So I haven’t had the chance to get back into golfing for a very long time due to my career. About 8 years unfortunately. I was recently got the chance to play again for a work networking event. That is all it took to get the fever going again. After this round I began searching for a set of clubs again. I wanted something complete without breaking the bank or really spending the time to pick out a custom set after being out so long since the last time I played. Enter Stix Golf Co. I saw these clubs and immediately fell in love with them. The look caught my eye, sleek and stylish. Just what I wanted to get back into playing. I may play badly but I’ll look good doing it! First round with them, they felt great, even the graphite shaft wasn’t too bad in comparison. All in all, I have a great set of clubs that will last me for a long time while I get back to playing on a much more regular schedule! Thank you Stix Golf Co.!

These clubs are working out fine, when I remember to align my grip properly they work like a champ! Glad I made the purchase!

Initially I was quite excited, this being my first set of new clubs. Always hand-me-downs. My first attempt to go to the range, a strap clip broke. I had to carry from parking to the range, (quite a walk) carrying like a suitcase.
After one large bucket, I noticed the face of each club hit had pock marks on it. It appeared like the sand from the refilled divots were leaving indentations. I thought this is highly unlikely that the metal was so soft it was left with sand impressions on the face. I ran my fingers back and forth and definitely felt sharp ridges along with the “ crater impressions “ one bucket of balls created. I took some automotive scratch removal cloths I had in hopes of removing the marks. I’m certainly not a golf club expert by no means, but my excitement and opinion of the clubs took a nose dive. The driver showed no signs as I assume they are titanium. 3w-9-7-5-4h all had consistent marks on and in them. At first I thought they were used, but inspecting the ones not used, it was to the contrary. Hopefully they have a good explanation or will honor my request for a RMA. If I accept them without question, I fear psychologically, I won’t be able to block my mind of what I’ve seen and know on the face of these clubs. 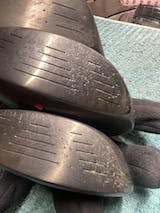 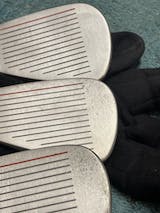 Get clubs that fit without a complicated fitting

We have options for most heights, weights, ages and skill levels.

Still need help deciding the right fit for you?